Since 2010, the UK Government has been proposing changes to the education funding system with the aim of making school funding fairer. Under a new National Funding Formula (NFF), money would be moving from London and other urban areas to schools that had traditionally received less funding. 70% of London’s schools would lose funding as a result of the introduction of the NFF, with at least one school in every local authority area experiencing a reduction. Combined with additional cost pressures such as inflation, the apprenticeship levy, increases to the teachers’ pension schemes and national insurance contributions, schools across the country are facing real-term cuts of 8% between 2014-15 and 2019-20, equivalent to £3bn.

London Councils commissioned Shift Learning, TES and The Education Company to research the views of headteachers, with a view to uncovering the challenges faced by schools, how headteachers were approaching these challenges, and their expectations for the future.

In-depth follow-up interviews were then conducted by Shift Learning, speaking with 48 London headteachers from a broad range of London schools. The interviews delved deeper into the survey responses to understand the current and future impact of the cuts, as well as exploring headteachers’ views around the role local authorities and other bodies might play in the future around accountability and school performance. 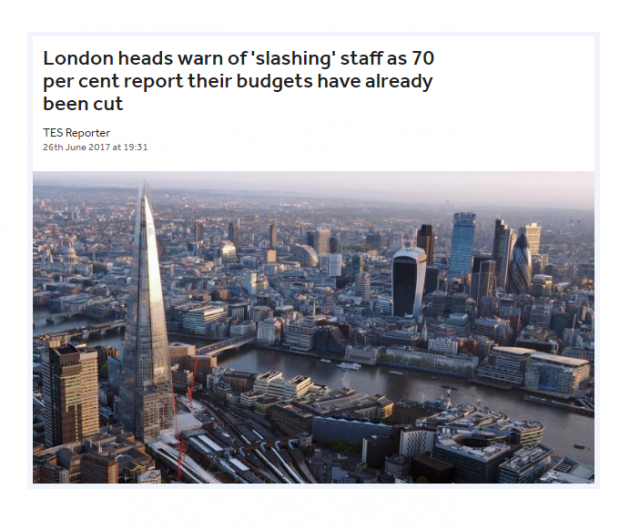 And some news generated from the report here: